Want to become a registrar, or looking for technical information?
NO / EN

On 17 March 1987, Norway was assigned a strange, new feature whose significance few people really understood. This feature was the national code for Norwegian domain names, .no, written with a dot in front, which made the signifier even more perplexing. The domain name system, however, was a cornerstone in the effort to bring the internet to the masses.

Once upon a time. Before Facebook and before email. People talked of computers in hushed voices, and the internet was something only a handful of experts in the world were familiar with. We filled out our tax returns on paper and stood in line on 31 January to hand it in, librarians kept track of thousands of books using catalogue cards, a visit to the travel agent in town was in order if you wanted to go somewhere, and the national railway wrote train tickets by hand. Office work was all about ledgers, carbon paper and correction fluid. Knowledge came from books, unless we got the opportunity to learn from someone directly, and news came from newspapers – on actual paper – or the Norwegian Broadcasting Corporation. In newsrooms, editors started their day by going through the several metres of telex notices that had come in overnight. 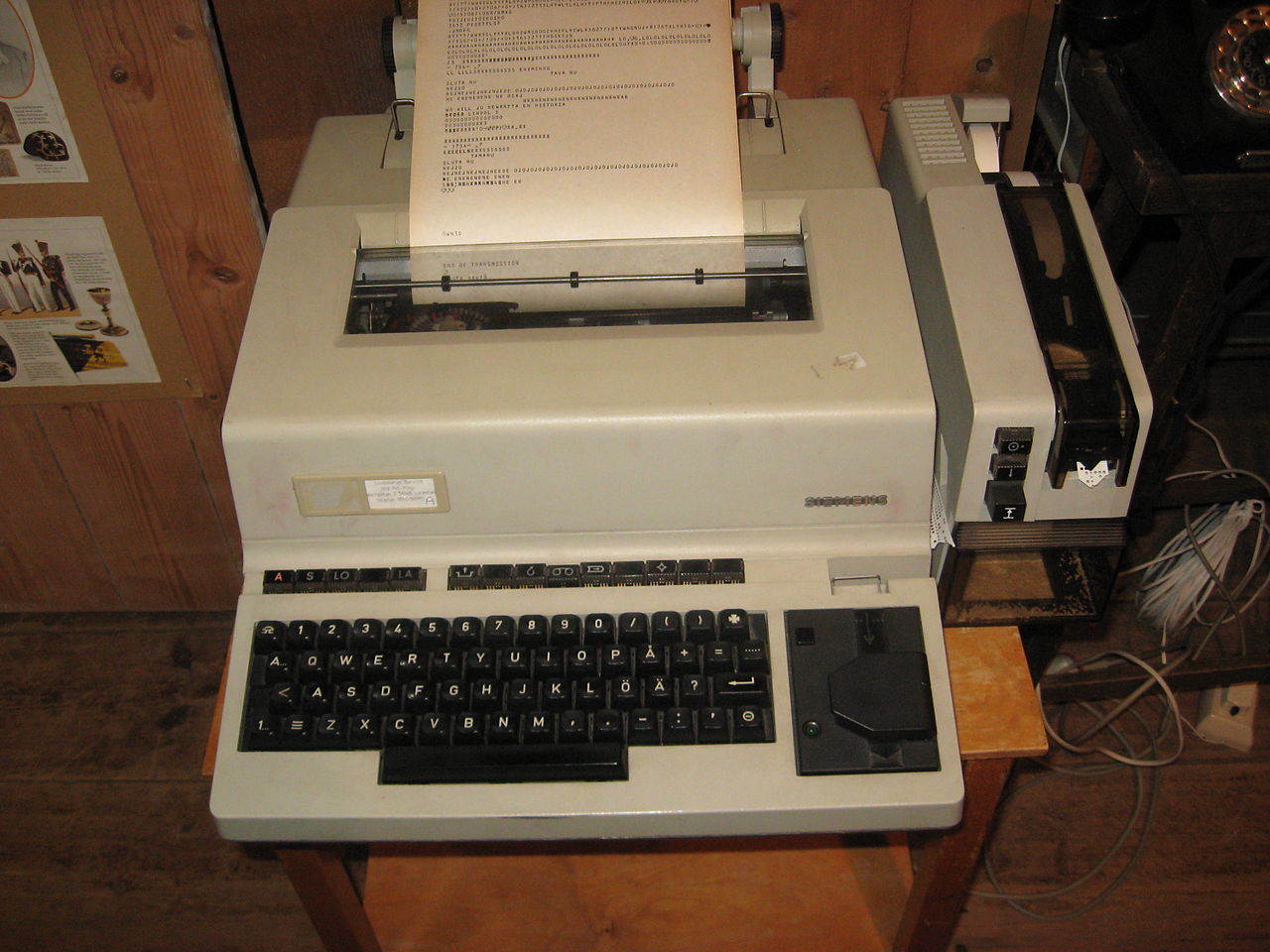 Photo: wikipedia.com
This was the 1980s, only three decades ago. In the years that have passed since, we have developed Altinn and other services for communication with public agencies and institutions, and we buy tickets and everything else we could possibly imagine by a couple of swipes on our phone. Swipe again, and the world’s collective information and knowledge – real and fictional – are literally at our fingertips in quantities none of us are even remotely able to process. In addition, the internet is now a stage, where each of us has the opportunity to build an identity and showcase it to the world. This development has taken place so smoothly that most of us take the technology and our unlimited access to information for granted. When I search for something or enter an address into my browser, I expect to find the answers I’m looking for, regardless of whether I am at work, hiking in the mountains or on an aeroplane, and whether I’m at the top of Galdhøpiggen, in Ghana or on Greenland.

The internet works seamlessly almost everywhere in the world, but this isn’t down to luck or coincidence. There are layers upon layers of technology between my phone and the network through which traffic must be routed, just as there are layers upon layers at the other end, before a recipient can see or hear what I just sent him. This technology must be precisely standardized and set up in order for everything to work, and there must be global agreement if the internet is going to work anywhere in the world. The individuals who started this adventure understood this, and they were very thorough, both in terms of the technology itself and the organization around it.

The first commercial browser, Netscape Navigator
The internet works just fine without the domain name system. It is possible to find information and services using their machine addresses, but in practice, this is too cumbersome for the average internet user. The domain name system makes it much easier to navigate, in that it translates machine addresses to names we can read and remember. In combination with a browser, a concept that was first introduced in 1991, this was a recipe for bringing the internet to the masses. 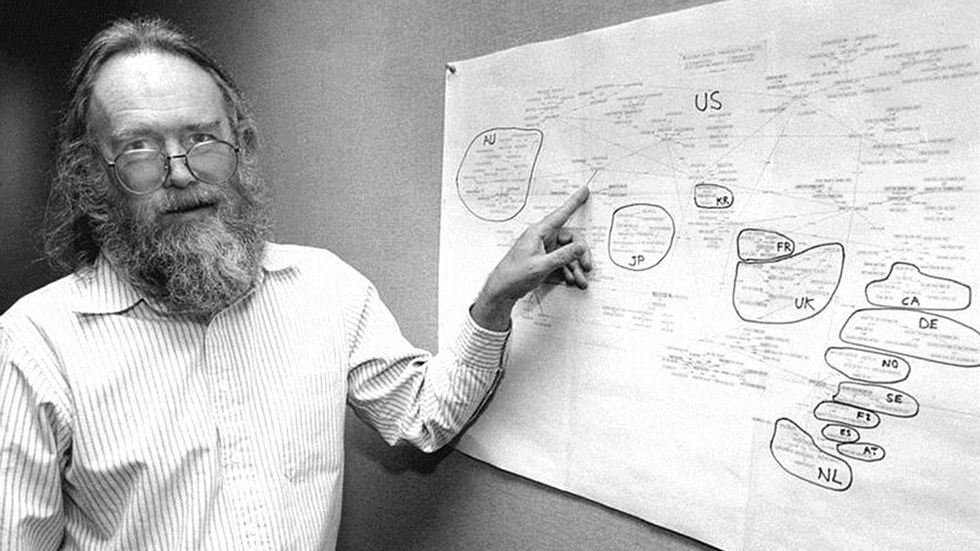 American Jon Postel created the scheme for national country codes for domain names and delegated the codes to each country from 1987. Here with his handmade drawing of the first country codes. Photo: Irene Fertik, USC News Service
When the Norwegian top-level domain was established in 1987, there were very few domain names in the world. Despite the negligible number of domains in existence at the time, internet pioneers had the foresight to create a system that would be able to handle the growth they predicted would come. And grow it did. Today, there are approximately 330 million registered domain names the world over, and the structure that was created in the 1980s has handled this unparalleled expansion without a hitch. For various reasons, it took a while for the internet to truly take off. In 1995, there were still only 1000 Norwegian domain names. From then on, things skyrocketed, and only three years later there were more than 100,000 Norwegian domains. The trend continued, and today, the number is approximately 725,000, and new domains are registered every day. Early on, ordinary internet users associated domain names primarily with websites. Email is the other main application for them, but it took many years before we could count on being able to connect with people at work and at home using email. In academic communities, email became common in the early 1990s, whereas the rest of society didn’t catch up until the end of the decade. It’s impossible to say how many Norwegian email addresses are in use today. Every domain name can have an infinite number of email addresses, and there are also an infinite number of free addresses available under domains such as gmail or hotmail. Today, the internet and domain names are part of a key infrastructure in all aspects of society, and we depend on them in a number of important areas. In line with this development, issues concerning management of the Norwegian domain resource soon came to the forefront for both Norwegian authorities and various interest groups. In a way, the domain resource is infinite. In principle, it is possible to combine letters and numbers in a virtually infinite number of ways. Competition for good names can be fierce, however, and there are sometimes disputes over both domain names and services linked to the domain. It is essential that this area be regulated in an open and democratic way, ensuring fair distribution of the resource and making sure that dispute resolution is handled in accordance with standard principles of law. In Norway, we have had a well-established model and a structured operation of the top-level domain from the very beginning. The Norwegian top-level domain is known as a quality domain, and it is by far the preferred choice of enterprises and private individuals in Norway. Key reasons for this are that the service is very robust, and that the processes involved are open and predictable. People generally trust a Norwegian domain name; it is considered safe.

17. mars 1987
.no registered as nationa top-level for Norway by Jon Postel
1987
.no delegated to the internet pioneers Pål Spilling and Jens Thomassen, and further delegated to UNINETT
1989
The oldest preserved zone file containing 19 domain names
1991
Launch of World Wide Web made internet available for ordinary users
1995
For the first time more than 1,000 new domains were registered during one year
1996
The name Norid was created, an acronym for Norwegian Registration service for Internet Domain names
1998
Google was launched and changed the way to find information online
2000
The number of .no domains exceeded 50,000
2001
Companies and other enterprises were allowed to register more than one domain name, and could register watever name they wanted and were no longer restricted to only register their company name or trademark
2014
Private individuals were allowed to register domain names directly under .no
2016
700,000 Norwegian domain names registered
17 March 2017
30 years of .no
Published: 27 September 2017
Updated: 15 June 2019